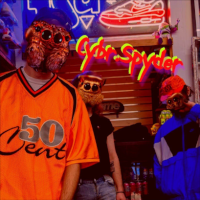 CYBR.spyder is a queer bedroom electro punk project born out of a dingy apartment in midtown Sydney, Australia. When vocalist Aaron Rimmer and producer Ashley Scott began to make music together, their only intent was to make catchy tunes that sounded as strange as they felt. Within weeks of the bands inception guitarist/vocalist Henry Gye joined and the band became a trio. Drawing inspiration from 60's Art Pop, 90's alternative rock and the futuristic sounds of artists such as Sophie and Death Grips, CYBR.spyder seeks to create music that is at once nostalgic and innovative.