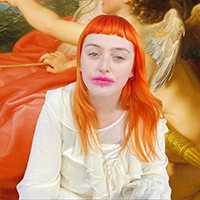 There is a giant lily that grows, slowly, in the Himalayas. For most of its life, it appears to be a rather unassuming collection of heart-shaped leaves - until one day when it miraculously sprouts to three meters tall and unfurls in to fragrant angel-horn flowers. For queer Australian artist Heirloome, a self-confessed ‘weird kid and late bloomer’, this flower is more than just an analogy - it’s a prophecy. In the chaos of a turbulent youth, they found sanctuary in the carefully crafted other-worlds of ‘mothers’ Kate Bush, Björk & ANOHNI. In the secret language of birds and spirits, they found the courage to embrace their inherent liminality - and to sing. The resulting sound is aural magic realism - shimmering chamber pop, beats made from salvaged fox furs and grasses, harps, ukuleles, and Heirloome’s ethereal yet powerful voice at the centre of it all. It’s music that is simultaneously fantastical, whimsical and vulnerable - enchanting while being heart-achingly honest.